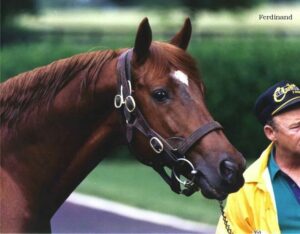 Horse racing is a sport of great stories. Who can forget the triumphs of Secretariat, Seattle Slew, and American Pharoah? Few people can fail to be inspired by the story of Seabiscuit, a horse that became America’s favorite despite being given up on by his first owner. But, for all the happy stories of horse racing there are also sad tales. Perhaps there is no more sadder tale than that of Ferdinand.

In 1983, horse owner Howard Keck welcomed a new foal to his stable. The chestnut colt was strapping and healthy. Its bloodline suggested that there could be great things in store. The colt’s sire was Nijinsky and its grandsire was the great Northern Dancer. All of the signs said that this homebred colt would put Keck and his family on the map.

A horse like this one deserved a regal name, and Keck named the animal Ferdinand. He blossomed early and by 1986 was prepped and ready to compete in the Kentucky Derby. The training duties were handled by the late Charlie Whittingham, a patient horseman who had never before scored a win in the Run for the Roses. Bill Shoemaker was chosen to ride the horse and the results were spectacular. Ferdinand won the Kentucky Derby.

The next year things only got better for the colt. Ferdinand entered the 1987 Breeders’ Cup Classic for a match up with Alysheba. Ferdinand won the encounter but would be unable to best his rival in future affairs. Keck and his family decided to retire the horse with career earnings of more than $3 million. He also claimed multiple Eclipse Awards along the way including Horse of the Year in 1987.

It was decided by Keck that Ferdinand would begin his career as a sire at Claiborne Farms. His fee was a modest $30,000. Even though good brood mares were brought to Ferdinand, the horse failed to sire horses that justified the fee. As a result the horse was sold to a Japanese bloodstock company in 1994.

At the time, Japan was looking to build its own impressive roster of stallions and the money they were offering owners was considerable. The country had successfully syndicated horses like Sunday Silence. They were willing to take a chance on Ferdinand, and the horse spent six years at stud and bred 77 mares in his first year. The expectations were high.

Unfortunately, Ferdinand failed to perform once again. His offspring were simply not performing well on the racetrack. In his last year at stud Ferdinand was only bred to 10 mares. The stud farm had no choice but to sell the stud to a horse dealer, and in 2001 Ferdinand began a journey that would culminate in sadness for the Keck family.

A Black Mark for Horse Racing

No effort was made to contact the Keck family when Ferdinand was sold by the stud farm to Yoshikazu Watanabe. A reporter for the Bloodhorse magazine, Barbara Bayer, attempted to track down the whereabouts of the stud. She had no idea that her efforts would culminate in one of the saddest stories of horse racing.

There is no record of where Ferdinand met his grisly end. All that is known is that this former winner of the Kentucky Derby likely ended up as pet food. The Japanese also consume horse meat so it is also possible Ferdinand was processed for human consumption.

The Legacy of Ferdinand

According to those who worked with him and handled the horse, Ferdinand was a gentle soul. It was said that he could be haltered with ease. He loved to be around people and was a pleasure to work with. It is beyond tragic that a horse of his caliber could come to such a sad fate.

Horse slaughter has been an ongoing problem in the United States. Unfortunately, irresponsible breeding practices are not helping remove this blight on our society. Too many owners breed horses that have little or no value. This results in far too many horses that lack racing talent. Such horses have no where to go and no purpose to serve. There was a time not so long ago in America when every horse had a job to do. There was no such thing as a pasture horse. Today, things are different. Horses finish their racing career and are left to stand around until they are sold to a slaughter house.

The case of Ferdinand was instrumental in forcing breeding farms to include buy back clauses in their sales contracts with owners. These clauses state that an owner can buy back the stud if the farm decides that it is no longer useful as a sire. Owners can then give the horse a proper retirement and let it live out its life with a measure of dignity.

In all sports we honor our former champions. Why should horses be any different? It only seems right that horses which achieve the highest honors in the sport of horse racing should be accorded a measure of respect in their post-race lives.

Would you like to watch and wager on live thoroughbred racing? You can sign up for an account with one of our recommended racebooks in just a few minutes and be betting from your computer, smartphone, or tablet. You will receive a nice sign up bonus in addition to free past performances and video replays to assist your handicapping. Check our Bovada racebook review, Twinspires review or even our Betamerica review. All great choice if you are in the US. 5Dimes review for folks anywhere!