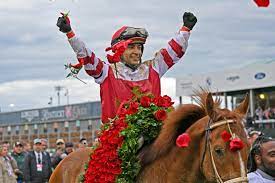 The 2022 Kentucky Derby was one for the record books. 80-1 longshot Rich Strike became the second-largest underdog to ever win the race. Rich Strike pulled off the upset over 19 other horses after drawing into the Kentucky Derby at the last minute.

Rich Strike Was Not Supposed Run In the Kentucky Derby

The horse Rich Strike arrived in Kentucky with little hopes of competing in the world’s most famous horse race. The horse was an also eligible, or AE, after the entries were drawn. An also eligible can only run in the race when another horse is removed from the field due to injury or other reasons.

Many horses that make the also eligible list don’t even bother to make the trip to Kentucky. In most years it would be a waste of time. Owners and trainers are not keen on scratching out of the big race, and those who condition these alternate horses sometimes cannot afford the expense of going to Kentucky without being in the field.

When you look at the history of Rich Strike, there isn’t much there to excite bettors. Most of them were probably scratching their heads when it was announced Rich Strike would step into the race after the horse Ethereal Road bowed out the day before. The horse was bred by Calumet Farm, a legendary outfit. But he did not live up to expectations, eventually being placed in a $30,000 claiming event.

Still, this horse trained by Eric Reed did what he had to do to earn his way into the Kentucky Derby just like all the other horses in the event. He still had to qualify even to be placed on the also eligible list.

The road to a longshot win in the Kentucky Derby was just beginning when Rich Strike drew into the race. Because he was an also eligible, the horse had to start from the 20 gate position. No horse in recent memory has ever won from such a daunting post position except Big Brown. Many would claim that Big Brown is a much better horse than Rich Strike.

The reason it is so hard to win from the 20 post position is that the position is located in the auxiliary gate. This extra gate is added to the regular starting gate so that 20 horses can be accommodated. Horses that are loaded into this gate begin the race on the far outside. They typically have to expend more energy in the beginning of the race to establish position and get themselves down to the rail. This is what allows them to save ground.

Rich Strike did not have the speed nor the ability to draw clear of the field. As a result, the horse was shuffled to the rear of the pack early and had to weave its way through traffic to make a run in the final stages.

The Experience Factor for Rich Strike

Another obstacle for the horse to overcome would be the experience factor. With respect to Eric Reed, the trainer has not been a consistent presence in the Kentucky Derby. The same can be said for Rich Strike’s jockey, Sonny Leon. A native of Venezuela, Leon is practically an unknown in the United States. The Kentucky Derby was definitely the biggest ride of his career.

Experience is a huge factor in the Triple Crown races. It allows the trainers and jockeys to know what to expect as the race plays out. It also can contribute knowledge into the tactics of other jockeys and trainers.

Why Would Someone Bet on Rich Strike to Win the Kentucky Derby?

This is a good question that may go a while with no satisfactory answer. The truth is that some people just like to bet on longshots. This is how you make big profits at horse racing, but most handicappers would have had a very difficult time making such a bet in this case.

On the surface, Rich Strike appeared to be a horse that had no business being in the Kentucky Derby. There was nothing to indicate that he could compete against horses like Epicenter, the favorite. In fact, the trainer of Epicenter derided Rich Strike after the race by calling the horse a claimer.

Rather than any serious attempt to handicap the race, the bettors that landed on Rich Strike probably did so because of other reasons. They liked the horse’s name. Maybe they liked that he drew into the race late, and though that somehow this revealed a fix of some kind. It is unlikely that factors like speed or pace were used to reveal the horse as a winner.

The Next Steps for Rich Strike – Is the Horse a Triple Crown Winner?

Immediately after the race in Kentucky, the connections of Rich Strike stated that they would be making the trip to the Preakness Stakes in Maryland for the second leg of the Triple Crown. A few days later it was announced that the horse would be skipping the Preakness after all. Most agreed that this was a wise choice.

No one seems to believe that Rich Strike has the ability to win a Triple Crown. Others even go so far as to say he would taint the honor if he did manage to pull it off. The owners of Rich Strike now have more to worry about than another race in the Triple Crown.

Rich Strike is still a Kentucky Derby winner, no matter what. As a colt he will have breeding value. If his owners decide to retire him now, they may be able to command larger breeding fees than they would if the horse continues to run and performs poorly. It is a gamble that almost any horse owner would be grateful to make if given the opportunity.

We know one thing for certain. Those who did not bet on Rich Strike to win the race are probably wishing that they did. You can bet on longshots and more when you sign up for an account with one of our recommended online horse betting sites. Check our Bovada racebook review, am wager review, BUSR review or even mybookie review. All great choice if you are in the US. 5Dimes review for folks anywhere!