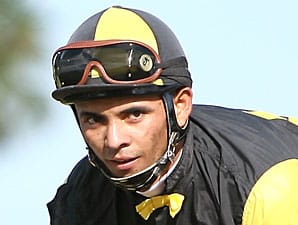 Panama has a history of producing great thoroughbred jockeys such as Laffit Pincay, Jr., who many consider to be the best jockey of all time. Jose Lezcano is among the most recent riders to carry on the fine tradition of Panamanian riders in the United States. His career has been filled with many highlights and notable horses such as Einstein and Royal Delta.

Lezcano was trained at the Laffit Pincay jockey school in Panama before moving his racing tack to the United States in 2003. Like many overseas riders before him, Lezcano attempted the South Florida circuit early in his career but ultimately moved east where he ended up at Monmouth Park in New Jersey. In 2005 Lezcano was fifth in the Monmouth jockey standings.

After toiling for a while mid-pack in the Monmouth jockey colony Lezcano caught a break in 2008 when he was given the opportunity to ride horses of stakes-level ability. His wins at Monmouth that year, 141, dethroned long-time leading rider Joe Bravo. He followed this by capturing the leading rider title at the Meadowlands Racetrack before heading back to Florida and Gulfstream Park. Working with jockey agent Jason Bidas, Lezcano notched 71 wins in 2009 at Gulfstream which was enough to give him the riding title.

Despite his success in everyday racing at a variety of competitive tracks, appearances by Lezcano in major races have been comparatively slim. He rode Deputy Glitters in the 2006 Kentucky Derby and finished in eighth place. In 2008 he was aboard Visionaire in the Kentucky Derby. Even though the horse was highly regarded the best he could manage was a 12th-place finish. The 2010 Derby yielded better results as Lezcano finished second on Ice Box.

Lezcano’s most recent triumph was landing the mount on Wise Dan in 2013 after regular rider John Velazquez was hurt in a Breeders’ Cup contest that prevented him from riding Wise Dan in the Breeders’ Cup Mile later in the card. Lezcano stepped into the irons and rode the horse to victory, giving Wise Dan his second consecutive victory in the race.

You can watch and wager on Jose Lezcano and horses like Wise Dan when you register an account at TwinSpires. Create an account today and access a full menu of betting options on a wide variety of tracks. Alternatively, check out another online horse betting site!