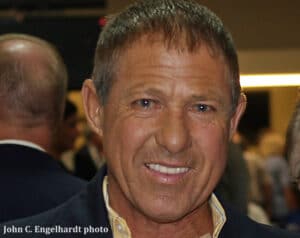 There may be no more horrific story in all of horse racing. Jockey Randy Romero, a talented rider sought after by many trainers, almost lost his life in a tragic accident at Oaklawn Park. While he survived, there was even more heartbreak and tragedy in the life of this racing legend. The story of Randy Romero is one that the fans of EZ Horse Betting will not soon forget.

From the Bayou to the Big League

Louisiana is known for producing some of the best jockeys the world has ever known. In terms of sheer riding ability, Randy Romero may have been the best of the best from the Pelican State. Romero’s ascendancy in the sport of horse racing was meteoric, but his fall was almost as spectacular.

Randy was born in Erath, Louisiana on December 22, 1957. The same general area also produced three-time Kentucky Derby winner Calvin Borel. Horse racing was a way of life in this small Louisiana haven. Romero’s father was a full-time state trooper who trainer quarter horses on the side. Young Randy learned to ride when he was very young, and gained horsemanship skills helping his family with their racing operations. The tradition remains strong. Randy’s brother, Gerald, still trains horses today.

There was a Hollywood movie made based on the Romero family titled Casey’s Shadow. The film explores the family’s training of quarter horses and their quest to capture quarter horse racing’s biggest prize. While the film takes liberties with the story, the general theme isn’t far from the truth. Randy Romero was destined to become involved with horses from the moment he was born.

In 1975, the young rider obtained his first mounts as a professional jockey at Evangeline Downs near his home. He was a standout from the very start. It wasn’t long before the biggest trainers in America had their eye on Romero. He soon packed up his tack and moved to the larger circuit of Oaklawn Park where he would have the chance to ride for more important trainers.

Romero had no idea the tragedy that was waiting for him in Arkansas.

Jockeys wage a daily battle with their weight. They must always keep an eye on it, and many of them are forced to take extreme measures to shed pounds. This can include purging and using steam baths to shed pounds. Romero was not immune to weight issues. He also likely wanted to do well, and this could have put additional pressure on him to lose weight.

Romero has stated that by the end of his career he was inducing vomiting five or six times a day. The abuse took a toll on his body, one that today threatens his very life. He has also stated that he’s suffered from Bulimia since he was just nine years old. Even then, Romero was encouraged to keep his weight down.

At Oaklawn, the jockey colony is a tough one. Some of the nation’s best riders compete on that circuit. It isn’t easy for a jockey to break in there, no matter how good they may have done in another circuit. And being overweight is a sure way to get on the bad side of trainers.

On a day in 1983, Randy Romero entered the sauna in the jockey’s room at Oaklawn Park. He needed to drop a few pounds, and the sauna was a quick way to do it. Romero began by rubbing himself down with alcohol. This aids the sweating process and helps the weight reduction. As he settled into the sauna, Romero accidentally broke a light bulb. The alcohol on his body ignited and soon Romero was in flames. When all was said and done, Randy Romero was rushed to the hospital with burns on two-thirds of his body. There was doubt if he would ever recover.

Randy Romero’s recovery was a long and painstaking one. He underwent months of treatment, but by 1988 he had ascended once more to the top ranks of horse racing in the United States. Trainer Shug McGaughey and owner Ogden Phipps chose Randy to ride Personal Ensign, one of the greatest fillies to ever compete. Under the guidance of Romero, Personal Ensign was undefeated in her career and placed in the Hall of Fame. Her biggest win came in the 1988 Breeders’ Cup Distaff.

Oddly enough, that same race would once again threaten to end Romero’s career. Randy had been given the mount on the filly Go for Wand. Romero guided her to a victory in the 1989 Juvenile Fillies race at the Breeders’ Cup. All eyes were positioned on Go for Wand the following year when she attempted to win the Breeders’ Cup Distaff with Romero aboard.

During a grueling stretch duel against her rival, Go for Wand suffered a catastrophic and fatal breakdown. Romero thrown from the horse head first to the track. He broke multiple ribs and also broke his pelvis. To this day, the event is hard to watch. Romero said it took years for the nightmares to go away.

Romero’s career would be a highly successful one, but it would be earmarked by injury. Romero had more than 20 surgeries to repair injuries sustained while racing. He would retire in 1999 with more than 4,000 career wins.

Romero suffered another setback in 2002 when he was diagnosed with a kidney ailment. The cause for the ailment was believed to be the purging Romero had done as a jockey. He also received a tainted blood transfusion during one of his many surgeries and contracted Hepatitis C.

The life of jockey Randy Romero should serve as a cautionary tale to would-be jockeys. The cost of a career as a jockey can be very great. It is not an occupation that should be undertaken lightly.

Would you like to bet on horses ridden by famous jockeys like Randy Romero? All you need to do is create an account with one of our recommended racebooks. You’ll get free past performances and even receive a welcome bonus. Best of all, you can bet the horse races online with your computer, smartphone, or tablet.

It is with great sadness that EZ Horse Betting must report that Hall of Fame jockey Randy Romero died just after midnight on August 29, 2019. Romero had been suffering from many health issues. He was surrounded by his family who stated that Romero passed peacefully after a recent bout with stomach cancer.

Romero will always be remembered for his rides in the Breeders’ Cup Distaff. Romero piloted Personal Ensign to a win in the Distaff in 1988 that is remembered for its stretch duel. Personal Ensign had to run down Winning Colors, the horse that was favored to win. Sadly, the Distaff would not only be the race which helped cement Romero’s legacy. It was also a race in which he could have lost his life.

In 1990 Romero was aboard the champion Go For Wand in the Distaff when the horse broke down in a stretch duel. Romero was hurled to the ground and suffered eight broken ribs. Despite his injuries he insisted on finishing his mounts for the day.

According to Gerald Romero, Randy’s brother, the jockey from Louisiana was one of the toughest men on the race track. Yet, despite his tenacity on the track he was known for genuine kindness to others and a passion for the sport. Romero took the time to attend benefits for disabled jockeys despite his serious illness which required dialysis treatments.

We extend our deepest condolences to the Romero family.