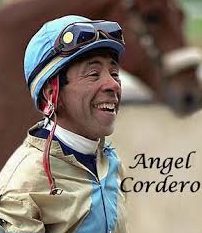 Angel Cordero, Jr. is known as one of the toughest jockeys to ever compete in professional horse racing. The native of Puerto Rico had a reputation for riding every race as though it were his last. Cordero was the first jockey from Puerto Rico to be inducted into the National Museum of Racing’s Hall of Fame, and won more than 7,000 races in his long career. At age 75, Angel Cordero, Jr. is still involved in racing as a jockey agent for the sport’s best riders.

Puerto Rico has certainly produced its share of top jockeys. Many credit the tough racing circuits in the country for the fiery nature of the jockeys who call Puerto Rico home. Riding horses there can be like going to war. Fouls are almost expected. This is the circuit when the young Angel Cordero learned how to ride. It must have been quite a culture shock for Cordero to arrive in New York where the rules of racing were more strictly enforced.

In the 1960’s Cordero made the decision to come to America and try his hand at professional race riding. He found that becoming successful was going to involve a lot of hard work and miserable conditions. In the morning training hours the temperatures at the New York tracks were almost always below freezing in the winter months. Cordero could be seen exercising horses for trainers without the benefit of a jacket or gloves to keep his body warm.

The sight of the young jockey working horses without protection from the cold gave him a reputation as a tough individual, but the truth was less cinematic. Cordero had no money. He could barely afford accommodations and food to eat, let alone clothes. He went with the perception, though, and began to cultivate his tough demeanor. Other jockeys began to take note, but initially the effort to project toughness backfired. Trainers backed away from what they thought would be a troublesome individual. That only made Cordero more determined to succeed.

There was a point when he decided to call it quits and return home. Even his roommate at the time, another jockey, told Cordero that he was not good enough to ride on the big circuit. For some reason the rider chose to stay in New York, but all he could manage to get as rides were horrible longshots. Somehow, Cordero began to get them into the Winner’s Circle.

The trainers at the New York tracks started to develop a fondness for Cordero’s riding skills, if not his personality. They began to give him better horses to ride, and the jockey made the most of it.

The dream of every jockey is to ride in the Kentucky Derby. Most of them also dream of winning the race just once. Cordero had the same dreams, but there was no way he could have known what would happen from 1974-1985. Cordero managed to win the biggest race in horse racing three times, putting him in an elite category of jockeys.

The first horse Cordero piloted to victory was Cannonade in 1974. Two years later he would strike gold again with Bold Forbes. Them, in 1985, Angel Cordero, Jr. won the race once more aboard the legendary Spend a Buck. He would also capture the Preakness Stakes twice and notch a win in the Belmont.

Although he was successful, Cordero was also the subject of some controversy. His rough riding tactics from Puerto Rico had never been abandoned. Many jockeys began to complain that Cordero was cutting them off during races, and he was the subject of many official inquiries and objections. These claims also led to problems in the jockey’s room where Cordero was known to fight at the drop of a hat.

Success in the Breeders’ Cup and Retirement

Near the end of his career, Angel Cordero, Jr. became a prominent rider in the yearly Breeders’ Cup events. He won many notable events including the Distaff, Juvenile Fillies, and Sprint. At this time, Cordero was showing the signs of his age. Many felt that he no longer could sit a horse with the same precision that he had mastered in his youth.

Cordero ran up against the one thing that jockeys cannot outrun – time. In 1992 he suffered a horrible injury as a result of a spill in a race, and with that his career was over. The jockey was not ready to give up racing, though, and found a new way to participate in the sport. He became a jockey agent and managed the career of John Velazquez.  One of the first trainers to work with Cordero and his jockey was a young man named Todd Pletcher.

Cordero has said that he was able to help mentor Pletcher during his early years as a trainer. The experience of the old jockey was without a doubt invaluable to Pletcher. The trainer began winning many important races with Velazquez in the saddle.

Today, at age 75, Angel Cordero, Jr. continues to participate in the sport he loves. He is considered royalty by those in the racing industry.

If you would like to watch and wager on horse racing with EZ Horse Betting, just take a moment to sign up with one of our recommended online horse betting sites. Check our Bovada racebook review, Twinspires review or even our Betamerica review. All great choice if you are in the US. 5Dimes review for folks anywhere! You’ll get a nice horse betting bonus when you make your first deposit, and you can bet from your computer, phone, or tablet right from the comfort of home.