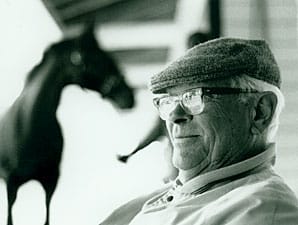 The 49-year thoroughbred training career of Frank Whiteley, Jr. is almost beyond compare in the sport of horseracing. The Hall of Fame legend trained some of the most successful horses of all time including the great Ruffian. To this day Whiteley’s training influence can be found in how horses are managed and cared for.

Frank Whiteley was born in 1915 on a farm in Centreville, Maryland where he grew up around horses and learned how to care for their basic needs. He spent the majority of his youth developing his training skills and riding horses at shows and fairs. This youthful experience culminated with Whiteley obtaining his training license in 1936 at just 21 years old. The early days of his training career in Maryland were lean ones as Whiteley fought to establish himself and secure good horses for his stable.

It wasn’t until 1965 that Whiteley gained recognition on a national scale by training Tom Rolfe, a phenomenal horse that captured the Preakness Stakes. Whiteley’s efforts with Tom Rolfe did not go unnoticed and in 1967 he became the trainer of Damascus. During Damascus’ 1967 campaign, a run that would see him capture wins in the Preakness, Belmont, Travers, and Woodward stakes races, Whiteley became known for a blunt and sometimes brash treatment of the media when he bothered to speak to them at all. When asked by a reporter how Damascus slept on the eve of the Kentucky Derby the trainer responded, “How the hell would I know? I didn’t sleep with him.” He then turned and walked back into his barn.

In 1974 Whiteley would become the conditioner for the horse that resulted in both his greatest triumph and tragedy. The filly Ruffian came to Whiteley in 1974 as a two-year-old and quickly established herself with an undefeated season that culminated with an award for U.S. Champion Filly. Whiteley had realized Ruffian’s potential from the moment he first saw her as a yearling at Claiborne Farm in Kentucky.

“She was only a yearling, but she had that quality you only see once in a lifetime,” Whiteley remarked about the experience.

1975 saw Ruffian sweep the filly version of the Triple Crown, the Triple Tiara consisting of three races at Belmont Park: the Acorn, the Mother Goose, and the Coaching Club American Oaks. She became only the fourth filly in history to complete the feat. By the time she was done Ruffian had amassed an undefeated record with ten straight wins.

Despite the protests of Whiteley, Ruffian’s owners decided to participate in a match race with the top colt of 1975, Kentucky Derby winner Foolish Pleasure. Many reports have suggested that Whiteley felt racing Ruffian against a colt was unnecessary, that she had nothing to prove. The race was hyped as a Battle of the Sexes and sought to capitalize on similar sporting affairs such as the famed tennis match between Billie Jean King and Bobby Riggs. The race was marred by Ruffian suffering an injury in the race that resulted in her being euthanized.

Whiteley rebounded somewhat the following year when he assumed the training duties of Forego and led the horse to an Eclipse Award as Horse of the Year. In 1978 Whiteley was inducted into the National Racing Hall of Fame at Saratoga and continued to train until retiring from the sport in 1984. It is clear that he never got over the loss of Ruffian.

Frank Whiteley, Jr. passed away in 2008 at the age of 93 in South Carolina. His legacy continues to this day.

The glory days of Ruffian and Frank Whiteley, Jr. may have come to an end but you can still experience the thrill of betting on your favorite horses and trainers by registering an account today Bovada Racebook!