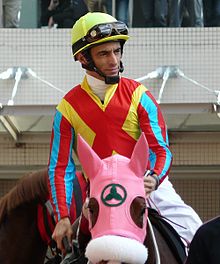 When thoroughbred trainers need a go-to jockey for a big stakes race they often turn to journeyman jockey, John Velazquez. “Johnny-V” as he is known on the track can get the job done. As of 2014 Velazquez is the all-time leading money winner in racing history with more than $300 million in purse earnings.

John Velazquez was born in Puerto Rico in 1971 where he learned to ride thoroughbred horses. In 1990 he won the first race he rode as a professional jockey. The riding talents of Velasquez were so strong that they got the attention of Angel Cordero, Jr. who was then a jockey agent after completing his own Hall of Fame racing career. Cordero convinced Velasquez to move his racing tack to the United States where he tackled the tough New York circuit.

During his time in New York, John Velazquez earned an amazing 24 riding titles at Aqueduct, Belmont Park, and the legendary Saratoga while competing against the best riders in the sport. He set a record by winning six races in one day at Saratoga on September 3, 2001.

Velazquez begin to garner a reputation as a top stakes race rider by winning the Dubai World Cup in 2005. His first win in a Triple Crown race came in 2007 on the filly Rags to Riches in the Belmont Stakes by defeating a field of male horses that included Curlin. Velazquez also notched wins in the Florida Derby, Whitney Handicap, Ohio Derby, and Kentucky Oaks to name but a few. Despite all of his success there was one feather missing in John Velazquez’s cap: a win in the Kentucky Derby. As the 2011 Derby neared Velazquez found himself in an unfamiliar position. He did not have a horse in the race. The horse he was supposed to ride and likely favorite, Uncle Mo, developed a stomach issue and had to be scratched. Johnny V would be watching the race from the jock’s room. Little did he know that the race was about to take a dramatic turn.

Jockey Robby Albarado was slated to ride Animal Kindom in the Derby. On the Friday card before the big race on Saturday Albarado was injured and taken to the hospital. He was released with minor injuries and proclaimed himself able to ride but the trainer of Animal Kingdom wasn’t sure Albarado was capable of riding. Graham Motion chose to remove Albarado from Animal Kingdom and seek another rider. The rider he found was John Velazquez. Animal Kingdom romped to a win in the Kentucky Derby and was ridden again by Velasquez in the Preakness Stakes where he finished second to Shackleford.

Although now past 40 years of age, John Velazquez shows no signs of slowing down. As of June 2014 he has won 5,146 career races. Check our Bovada racebook review, Twinspires review or even our Betamerica review as they are all great choice if you are in the United States. 5Dimes review for folks anywhere!