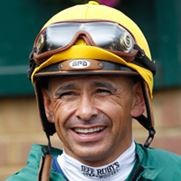 A true enigma in the world of professional horseracing, jockey Mike Smith is one of the most polarizing figures in the sport. Fans either love him or hate him. Known as the talented rider of Zenyatta and many other famous horses, the 50-year old Smith also gained attention with his appearance in the reality TV show Jockeys which aired in 2009 on Animal Planet that explored his sometimes contentious relationship with jockey Chantal Sutherland.

Mike Smith was born in New Mexico, a mecca for horseracing and races among quarterhorses in particular. Smith’s father was also a jockey and by the time Mike was 11 he was already competing in races. He didn’t obtain his actual jockey’s license until age 16 in 1982.

The racing action in New Mexico was limited and Mike Smith soon ventured into the American Midwest to begin his apprenticeship at Canterbury Downs in Minnesota. In 1989 Smith would move to the New York racing circuit where he had an impressive career until leaving in 2000 for the warm climate of Southern California. It was in California that Mike Smith would score his greatest career achievements.

Looking for an Online Racebook to bet on horses? We highly recommend BUSR 🇺🇸, 🇨🇦, 🇳🇿, 🇵🇹, 🇩🇪, 🇳🇴 & 🇸🇪 or if located outside the united states, 5 Dimes 🌍!

His move from New York was punctuated by a series of injuries in 1998 that demonstrate just how dangerous the jockey profession can be. Smith broke his shoulder and two vertebrae in his back in separate spills. The last happened at Saratoga while Smith was leading the riding colony in wins.

The first year Smith spent in California was a good one. It culminated with Smith being honored with the George Woolf Memorial Jockey Award which is given yearly to a jockey whose career reflects not only good athleticism but good character. Two years later his reputation as a quality rider would pay huge dividends in the form of Azeri, a filly that went on the win the Breeders’ Cup Distaff and Vindication, a colt that won the Breeders’ Cup Juvenile.

In 2005 Smith gained attention as the rider of Giacomo, a 50-1 longshot that upset Kentucky Derby favorite Afleet Alex to win the first jewel of the Triple Crown. The win was satisfying because it was Smith’s first in the Kentucky Derby and came aboard a horse sired by Holy Bull, a 2-1 Derby favorite himself that was ridden by Smith to a 12th-place finish in the 1994 Derby.

More than any other horse, Smith’s name will forever be linked with Zenyatta, the filly that many consider to be the best horse of all time. In a 20-race career Zenyatta won 19 races, 17 of them with Smith in the irons. Her lone defeat came at the hands of Blame in the 2010 Breeders’ Cup Classic. Known for her dramatic, come-from-behind running style, Zenyatta was taken to the rear of the field early in the race. Many race fans claimed that Smith had the filly too far out of contention and asked her to do too much in the latter stage of the race. Despite a furious closing run Zenyatta was unable to catch Blame at the wire. After the race a tearful Smith stated that the loss was his fault.

Smith’s appearance in the 2009 documentary Jockeys on Animal Planet was not without controversy. In the series Smith is shown to often demean his girlfriend, jockey Chantal Sutherland, by claiming her riding skills do not compare to his own or those of male jockeys in general. He also hints at this during a dinner with Sutherland’s parents that results in an awkward silence. Not long after the show ended the two riders ended their relationship. Smith and Sutherland competed in a Battle of the Exes Match Race in California that was hyped as a way to settle their dispute. The event was an uneventful race that Smith won and largely regarded with apathy by horseracing fans.

To date Smith has won more than 5,000 career races and continues to make his home base in Southern California. Check our Bovada racebook review, Twinspires review or even our Betamerica review as they are all great choice if you are in the United States. 5Dimes review for folks anywhere!