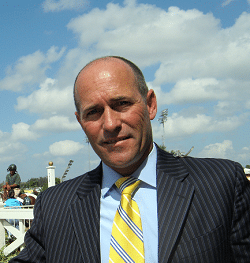 Gary Stevens is one of the most successful jockeys to ever compete in thoroughbred horseracing. During his amazing career as a jockey, Gary Stevens has ridden some of the most famous racehorses of all time including Winning Colors, Thunder Gulch, Silver Charm, and Victory Gallop. As of this writing, Stevens is nearing 5000 career American wins and has already passed than number worldwide, making him a true legend of the sport.

Stevens began his career at the tender age of 14 as a quarterhorse jockey. As a youth he was afflicted by Perthes Syndrome, a degenerative him disease that forced him to wear a brace at the age of 7, so many people were surprised when Stevens exhibited a knack for race riding. In 1979, Stevens dropped out of high school to become a full-time thoroughbred jockey and scored his first win at Les Bois Park in Boise, Idaho. He then became a leading rider on the Washington circuit before moving his tack to Southern California and achieving the greatness that has hallmarked his career.

Stevens’ first win in the Kentucky Derby was in 1988 aboard the filly Winning Colors. The gray became one of only three fillies to ever win the Kentucky Derby. Stevens continued his success with three wins in each of the American Triple Crown races despite never completing the elusive trifecta. The closest he ever came was on Silver Charm in 1997. After winning the first two legs, Stevens and Silver Charm finished second in the Belmont Stakes.

In 2005, Gary Stevens retired from horseracing due to injuries suffered in the sport. At the time of his retirement Stevens’ mounts had racked up an astounding $221 million in winnings. Stevens kept busy during his retirement by working as an analyst for horseracing television coverage and as a jockey agent, but the thrill of riding was too much to resist. After convincing himself that his body could withstand the rigors of riding again, Stevens made a triumphant return to the racetrack in 2013 and promptly won the Preakness Stakes aboard Oxbow. He had proven that his abilities as a top jockey were still sharp at the age of 50.

Gary Stevens has also proven himself to be an amazing actor with starring roles in the huge hit Seabiscuit and the HBO series Luck. We hope you enjoyed your visit to ezhorsebetting.com and that you take your time to explore the site.