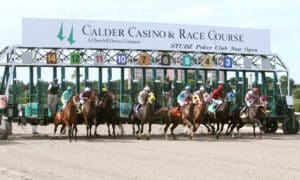 Calder Racecourse in Miami Gardens, Florida is known for hosting great thoroughbred racing that attracts many top trainers and horses. A reincarnation of Miami’s Tropical Park which closed in 1972, Calder also appeals to handicappers because the race outcomes can be very challenging to predict. The summer weather in Florida lends itself to lots of rain. It is not uncommon for a rainstorm to muddy the track in the middle of the racing card and be gone before the latter races!

The History of Calder Racecourse

Stephen A. Calder, a Miami real estate developer, had a dream to bring summertime racing to Miami. He successfully lobbied the Florida legislature for new racing dates that would complement the spring meet at Gulfstream and the fall meet at Tropical. Calder Racecourse held its first day of racing on May 6, 1971. Not long after the new track opened the owner of Tropical announced that he would be closing that track and giving the fall dates to Calder.

The track was renovated and expanded throughout the 1980’s and was sold on a couple of occasions. With the arrival of simulcast racing in 1997 the track greatly increased its daily handle (the total money bet) and was able to increase purse money and develop the racing events it is now famous for. These improvements garnered the attention of Churchill Downs, Inc., and the company responsible for the Kentucky Derby purchased the track in 1999 for $86 million dollars.

Today, Calder is still owned by Churchill Downs but the daily racing operations have been leased to the Stronach Group, the largest thoroughbred racing company in America.

The length of the main track is one mile and Calder also boasts a 7/8 mile turf course.

Since 2000 Calder has hosted its annual Summit of Speed, a day of racing sprints that have hosted many Breeders’ Cup and Eclipse Award winners. Lost in the Fog and Cajun Beat have been two of the famous horses to compete in the Summit of Speed.

Calder also hosts thoroughbred auctions during the year where prospective owners can bid on top-quality thoroughbreds. Perhaps the most famous sales story to emerge from Calder is that of The Green Monkey. The horse was sold for 16 million at a Calder sale in 2006. The Green Monkey became legendary in horseracing circles when he failed to win a race and retired after just three career starts. He was subsequently sent to stud where his fee was a modest $5,000.

Check our the online horse betting sites that are reviewed here at EzHorseBetting.com.  You can read our Bovada racebook review, Twinspires review or even our Betamerica review as they are all great choice if you are in the United States. 5Dimes review for folks anywhere!