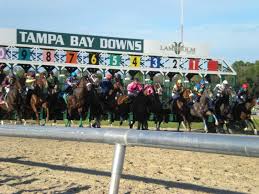 While not as famous as its counterpart, Gulfstream Park, Tampa Bay Downs still offers great thoroughbred racing each year from December until May. Situated in Oldsmar, Florida, a hallmark of Tampa Bay Downs are huge fields. It is not uncommon to see ten horses or more in each race. The track has been lauded by the Horseplayer’s Association of America as the second best track for bettors behind Keeneland. This is because the large fields make races very difficult to handicap and often produce longshot winners.

Tampa Bay Downs is actually older than Gulfstream Park, having opened in 1928. In 1998 the track added a turf course to increase its attractiveness. Throughout the years, Tampa Bay Downs has been known by a variety of names—Tampa Downs, Florida Downs, and Sunshine Park to name a few. The current name was adopted in 1986.

The stakes schedule at Tampa Bay Downs is light compared to other tracks in Florida, but the Grade 2 Tampa Bay Derby is worth watching as showcase of the nation’s best three-year-old horses as they try to win their way into the Kentucky Derby.

Jockeys to watch at Tampa Bay Downs are Daniel Centeno and Leandro Goncalves. Centeno won the jockey title four straight years from the 2006-2009 and also holds the record for most wins during a single meet with 144.

Trainers Jamie Ness, Kathleen O’Connell, and Gerald Bennett have all found themselves at the top of the standings in recent years. Ness won an amazing 79 races during the 2011 meet.

Don’t miss the exciting action of Tampa Bay Downs and the Tampa Bay Derby by creating an account now at Twin Spires or another online racebook! You will find all of the handicapping tools and betting options you need to be a winner!