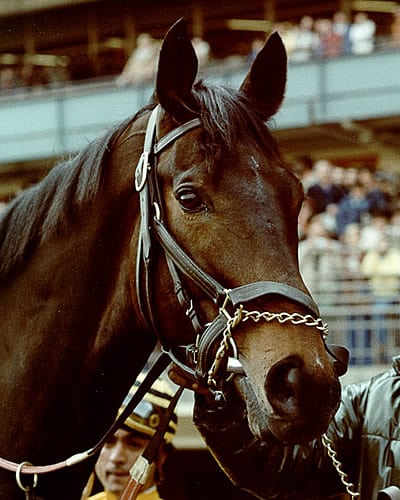 Forego came onto the racing scene at the same time as other great racehorses like Secretariat, Sham, Shecky Green, and Stop The Music. He soon became a fan favorite as he defeated the best of his generation.

Unraced as a two year old, Forego went right to work early in his three year old season winning two of his first three races at Hialeah Park before moving to Gulfstream Park for a pair of second place finishes in stakes races. The first Saturday in May he was fourth in the Kentucky Derby behind Secretariat.

With Secretariat in the spotlight during 1973, Forego was barely noticed. He had been a consistent runner that year winning 9 of his 18 starts and finishing in the money on 6 other occasions. He had equaled two track records and set another in New York. Being a very big horse, bigger than most, he was a late bloomer.

In 1974 Forego began to dominate the upper class of racing’s greats. He started the year off by winning three prestigious handicaps (a race where weight is assigned in an attempt to even the field) in Florida. Due to his winning ways, Forego’s assigned weights began to increase. After winning the Carter Handicap in New York carrying 129 pounds, Forego was assigned 134 for the Metropolitan Mile where he finished second behind Arbee’s Boy who carried 22 pounds less than Forego.

The weight a horse carries can affect its speed and endurance over the course of a race. Some suggest that a mere two pounds of additional weight can cost a horse one length over a distance of a mile. Despite being saddled with higher weights than his competitors, Forego managed to defeat many excellent competitors.

During his four year old year, Forego accomplished a remarkable and unheard of feat by winning a race at 1 1/4 miles, dropping back to a 7 furlong sprint where he bested the top sprinters in the country, then moving on to win the two mile Jockey Club Gold Cup all in a span of 7 weeks. He earned the titles of Champion Sprinter, Champion Older Male and Horse of the Year for 1974.

Forego continued his winning ways in 1975, winning numerous handicaps carrying more than 130 pounds and once again capturing Horse of the Year honors and Champion Older Male. In 1976 his most memorable victory came in the Marlboro Cup. Forego had been assigned a staggering 137 pounds and the track was listed as sloppy, a surface that Forego didn’t much care for. Entering the stretch the big bay gelding was still far back from the lead. Even jockey Bill Shoemaker didn’t think he could win the race but Forego swung out into the middle of the track and made his signature late surge. He powered through the slop to nip Honest Pleasure at the finish line by a head and just missed equaling the track record by 1/5 of a second.

During his 6 year career on the track Forego ran into the history books as one of the greatest handicap horses of all time. He earned a total of 8 Eclipse Awards which included Horse of the Year three years in a row. He won 34 of his 57 races with 16 seconds or thirds and earnings of nearly two million dollars. What made his accomplishments even more remarkable was the heavy weight he was required to carry and the fact that he had bad legs. Throughout his career he was plagued with ankle problems but still managed to show the world the heart of a true champion. Forego was a horse of valor.

If you are interested in betting on horses online, you can check the section on our site that deals with racebook reviews. Take a minute to also check our Bovada racebook review, Twinspires review or even our Betamerica review as they are all great choice if you are in the United States. 5Dimes review for folks anywhere!

3 comments on “Forego – One of the Greatest Handicap Horses of all Time.”