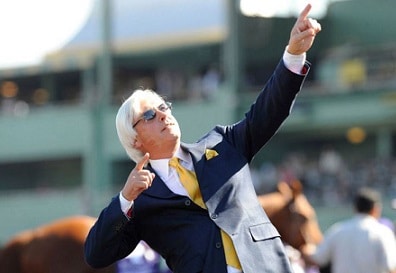 Few trainers in horseracing display the flair of Bob Baffert. His matinee idol looks and style make him an instantly recognizable face in the sport. Don’t let the outer appearance fool you, however. Baffert is a talented horseman that has worked his way up from the lowest levels of horseracing to the biggest racing events on the calendar. The horses he trains regularly compete in the Triple Crown, Breeder’s Cup, and Dubai World Cup.

Baffert began his training career like many others before him as a conditioner of quarterhorses. This type of racing was much more popular in the 1980’s and Baffert was moderately successful. He soon realized, however, that training thoroughbreds was far more lucrative and offered him the opportunity to work with a larger number of horses. In the early 1990’s, Baffert began to exclusively train thoroughbreds.

His success was almost immediate. Just five short years after making the switch, Baffert placed second in the Kentucky Derby with Cavonnier. The very next year he won the race with Silver Charm, a horse that would achieve amazing success and become one of the more productive sires of the modern era. War Emblem, Point Given, and Lookin at Lucky all followed as classic winners for Baffert.

Some of the most prominent thoroughbred owners have turned to Baffert for his training services. These include Bob and Beverly Lewis, Robert and Janice McNair, and the late Prince Ahmed bin Salman. It was the duo of Mike Pegram and Hal Ernhardt that helped to make Baffert a household name in horseracing. These two owners have remained with Bob Baffert since his quarterhorse days and provided many talented horses for his stable. Indian Blessing, Midnight Lute, and Real Quiet are just three examples of the stock that Pegram and Ernhardt have entrusted to Baffert. Real Quiet was a particularly good success in that he was purchased for just $17,000 at auction and earned over $3 million in his racing career. Being able to identify young horses with potential is another of Bob Baffert’s skills.

In March of 2012 Baffert was in Dubai preparing for the world’s richest racing event, the Dubai World Cup when he began to experience chest pains. The trainer was admitted to the hospital where it was discovered that he was suffering from a heart attack. Baffert survived this health scare and recovered to return to the races just two months later and score another second place finish in the Kentucky Derby with Bodemeister.

As of this writing Baffert has won more than 2,000 career races and is enshrined in the U.S. Racing Hall of Fame. More here. Hope you enjoyed your visit to EzHorseBetting.com take a minute to also check our Bovada racebook review, Twinspires review or even our Betamerica review as they are all great choice if you are in the United States. 5Dimes review for folks anywhere!

You may also enjoy this: